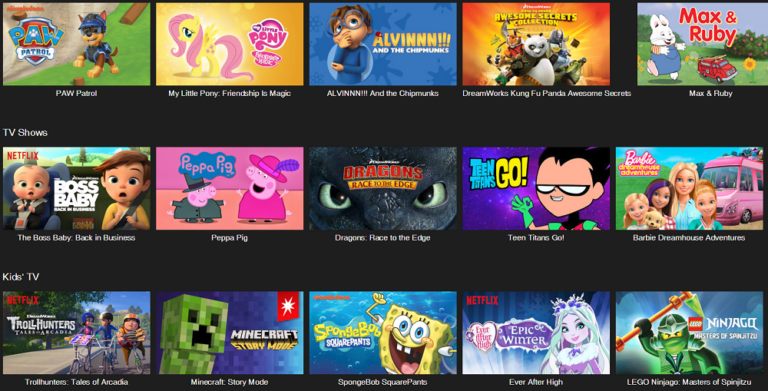 Due to the abundance of options on Netflix, it often gets tricky and difficult to select a show that is appropriate for your kid.

Every parent will agree with me on this that taking care of a kid is not easy. Especially when you have some work to do, and you need to keep their attention elsewhere and distract them for a few hours.

The simplest solution in such situations is to turn on the TV and put some kids’ shows on Netflix. However, due to the abundance of options available on Netflix, it often takes hours to find a good and kids-appropriate show that will keep your little one busy for a few hours.

Worry not; in this article, I am sharing the best kids shows on Netflix right now for you that you can put on for your kid, and it will keep them occupied.

My kids loved all of these shows, so they are also safe for kids to watch. I am also sharing a bit of detail about each show. This way, you can know what your child is watching without spending hours in front of the screen.

1. Trolls: The Beat Goes On

It stars Amanda Leighton as Poppy, the lead female of the show, who loves to sing. Moreover, it also stars Skylar Astin as Branch, who is the lead male character in the show. This show does not have any violent content as it is all about soft music and dance, which makes it a perfect fit for kids.

After the success of that show, the producers released another show called ‘Shaun The Sheep: Adventures From Mossy Bottom’ in 2020. The remake show has 1 season and a total of 10 episodes.

The show also has an 8.1 IMDb rating. In addition to that, it revolves around Shaun, the sheep that is living on the farm called Mossy Bottom. The sheep is having adventures on the farm all the time, with the rest of the gang and the dog called Bitzer. It stars Justin Fletcher as Shaun and John Sparkes as Bitzer.

The comedic genre of the show and the adventures that Shaun and the gang have on the farm are enough to keep any kid glued to the Netflix screen. This is the reason behind the show being one of the best kids’ shows on Netflix right now.

3. The Boss Baby: Back in Business

This show is a production of the original movie called ‘The Boss Baby’ that was released in 2017. The story of the movie revolved around two brothers. It showed the adventure they had while fighting the evil CEO of Puppy Co.

The Show ‘The Boss Baby: Back in Business’ was released in 2018 after the movie gained a lot of popularity around the globe. The show has 4 seasons, and the genre of the show is pure comedy, so your kid will enjoy it thoroughly.

In addition to that, this show has an IMDb rating of 6.5, which is why it is among the top kids’ shows on Netflix. The cast of the show has JP Karliak as the boss baby, Pierce Gagnon as Timothee, and David W. Collins as Dad. The story of the show revolves around the boss baby and his older brother Timothee.

The boss baby tries to manage his home life with his business life by taking the help of his older brother Timothee. The adventure both of these brothers have will keep your kid glued to the Netflix screen.

Every kid has spent hours in front of the screen watching the cartoon Scooby-Doo. With the lighthearted nature of the show combined with the fun the entire gang and Scooby-Doo have during every mission, kids of all age groups love this cartoon.

There have been multiple film productions of Scooby-Doo as well, and there is even a show production of the original cartoon. The show ‘Scooby-Doo! Mystery Incorporated’ was released in 2010, and it has a total of 2 seasons.

In addition to that, the show has an 8.0 IMDb rating which makes it one of the best kids shows on Netflix right now. The blend of mystery and comedy in all the episodes of the show is what makes kids love it so much. The show stars Matthew Lillard as Shaggy, Frank Welker as the voice of Scooby-Doo, Grey Delisle as the voice of Daphne, and Mindy Cohn as the voice of Velma.

This show has to be one of the best kids shows on Netflix right now. It features all the female superhero characters from DC comics. As every kid loves watching superheroes, I am sure your kid will love this show.

It has an IMDb rating of 7.1. The plotline of the show revolves around Wonder woman, Super Girl, and their other superhero friends at the Super Hero High School.

The genre of the show is adventure and comedy, which means it will have every kid jumping up on their toes with excitement. The show ‘DC Super Hero Girls’ shows all the superhero girls in high school having the times of their lives and fighting crime.

Teen Titans is one of the famous television cartoons of all time that had every kid glued to the screen. After the cartoon gained wide popularity, there was a production of the show called ‘Teen Titans GO!’. The show was released in 2013, and it has a total of 7 seasons. The IMDb rating of this kids show is 5.1.

The plot of this kids show revolves around superhero friends that love saving the world. The superheroes are Cyborg, Robin, Starfire, Raven, and Beast Boy.

Each of these superheroes has a superpower of their own that they use while fighting crime. Starfire has superhero strength, speed, UV energy production, and flight, Cyborg has superhuman strength, and his best power is that his body can transform into objects.

Beast Boy can transform himself into any animal, while Raven has the power of controlling different objects via telekinesis. Lastly, Robin knows martial arts and is also the leader of the team.

Together, the entire team has loads of fun fighting crime, but then they decide to stop fighting crime which then leads to some unfortunate events. The adventurous genre of the show is the reason it has gained so much popularity.

In addition to that, the cast of the show is Tara Strong as Raven, Greg Cipes as Beast Boy, Khary Payton as Cyborg, Scot Menville as Robin, and Hynden Walch as Starfire.

Every kid has used and loved the famous mobile application called ‘Talking Tom.’ Talking Tom was originally an application that showed a grey cat that repeated every word the user said in a cat voice.

The show has a total of 4 seasons, with an IMDb rating of 6.1. It is currently available on Netflix and is among one of the top shows in the kids’ category.

If your kid is being fidgety and is not letting you work, put this show on the Netflix screen, and he will stay busy for hours. The interesting plot of the show revolves around Tom and his friends. All the adventures they have will make your kid love the show.

Every mother has heard the name Peppa pig from their kids every now and then, and let me tell you; this show is among one of the top-rated kids shows on Netflix. Peppa pig has a wide audience around the globe, and kids of all age groups love it. The show was released in 2004, and it has a total season of 6 seasons that are available on Netflix.

In addition to that, the show has a 6.2 IMDb rating. The story of the show revolves around the little pig called Peppa and her friends in her school.

Peppa learns different things in school every day and also has lots of fun, which is why this show is ideal for younger kids. It stars Harley Bird as Peppa Pig, Morwenna Banks as Mommy Pig, and Richard Ridings as Daddy Pig.

9. My Little Pony: Friendship Is Magic

The all-time kids favorite, ‘My Little Pony: Friendship Is Magic’, had to be on my list of the best kids shows on Netflix right now. Even though this show was released in 2010, it is still among the top-rated Netflix shows that kids love. This show has a total of 9 seasons, and it ended in 2019.

In addition to that, with a 7.6 IMDb rating, it is one of the best shows on Netflix that you can put on for your kid. The story of the show is captivating enough for any kid to stick in front of the screen for hours. The plot revolves around the little pony Twilight Sparkle and her five friends.

The names of the friends are Rarity, Applejack, Rainbow Dash, Fluttershy, and Pinkie Pie. All of these little ponies have a magical power of their own. The magic is the main attraction for the younger audience.

What should my 12 years old watch on Netflix?

There are many shows available on Netflix that a 12 years old can watch. Some of them are The Babysitters Club, The Healing Powers of Dude, Kipo and the Age of Wonders Beasts, Alexa And Katie, DC Super Hero Girls, and Carmen Sandiego.

What should 9-year-olds watch?

The list of shows that are ideal for a 9-year-old includes Scooby-Doo! Mystery Incorporated, Teen Titans GO!, DC Super Hero Girls, Trolls: The Beat Goes On, The Boss Baby: Back In Business, Shaun The Sheep: Adventures From Mossy Bottom, and My Little Pony: Friendship Is Magic.

The popular show on Netflix called ‘the 100’ is a science fiction show, which is ideal for teenagers but not for kids under 12. The reason behind this is that the show features violence, and murder, which is why it is not considered suitable for younger kids.

Netflix is one of the best streaming platforms for all types of shows and movies. Whether you want to watch a kids’ show or keep your teenager engaged, there is suitable content for all.

The major task that often becomes a headache is finding a good show for your kids. This is why I compiled a list of all the shows that my kids love watching on Netflix. I have also shared little details of every show so that it is easier for you to pick one for your kid. Also, we covered the best movies for kids to watch on Amazon Prime, check it out!