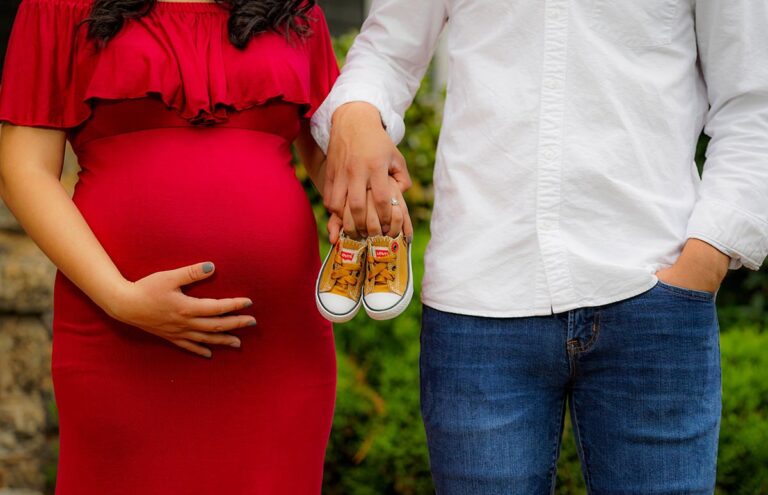 Baby Shower is a fun event to celebrate the arrival of a newborn baby into the family. It is a female affair but nowadays, the new mommies like celebrating with their partners. The dad-to-be, along with the male family members, are invited to the event as well. Modern-day fathers are more hands-on than before, and they like to contribute equally in all the parenting activities. As a result, more fathers are now attending baby showers with their wives.

The baby’s parents decide the guestlist for the event, and they can invite whoever they want. There are no hard and fast rules that men aren’t allowed or invited. The only thing that matters is the couple is happy and comfortable with the choice they make. Some information on “do men go to baby showers?” along with a few traditions and etiquette are given below. This article might help you to plan a baby shower for yourself or a friend.

Do Men Go To Baby Showers?

Baby Showers is a modern term, but the ceremony is quite ancient. This emerged in Ancient Egypt, and people have been celebrating this event since the Renaissance. Blessings and gifts were given to the new mom-to-be and the baby as the infant and maternal mortality rates were very high. Men were not allowed into the ceremonies like these as older and experienced women used to give tips and share their experiences with the new mommy-to-be.

The Baby Shower was a “talk shop” for all the women. Intimate discussions were done in the absence of men. But baby showers are now open to men because of the parenting shifts in recent years. Both the partners contribute equally to the upbringing of the child. It is not seen as a taboo anymore, and fathers like being involved in some capacity.

Modern-day baby showers are intimate gatherings with the people the expectant parents want to invite. The guest list might include family or close friends, and they are expected to bring a nice gift for the mother or the baby. Men are also invited by the father who is close in age or friends with any parents. However, if the couple decides to keep the baby shower limited to females only, men have their version of the shower called “dadchelor” or “diaper party.” The men are expected to bring diapers or any other gift that is best for the baby.

The co-ed baby showers are gaining popularity as the new fathers want to be involved in the big day. The baby shower has the same importance for the father as it has for the mother. This small gathering can bring everybody together, and the father gets an idea of what to expect when the child is born. The new dad-to-be might not give birth to the baby, but parenthood is a unique experience like the mother. He needs some guidance from the experienced daddy’s in his friend circle or the family to guide him a little for this new journey.

Although every family has its traditions for baby showers, modern-day events have a few things in common. Co-ed or modern-day baby showers are planned according to the people you are inviting. Everything is done according to what looks appropriate for your guests.

Both expectant parents shall decide the theme for the baby shower, so two different perspectives come into planning. If the couple themselves are not planning, they should hire a team of planners who consists of males and females. In this way, all the guests attending the event will feel included.

If a female friend, sister, or cousin plans to throw a baby shower for you, tell her to work with her male counterpart or hire some event manager. This incorporates all the elements everybody will enjoy, including the parents. It is best if the parents plan and coordinate everything themselves.

Having men on board can be fun as games can be structured for them to play. Fun activities for all the guests keep them entertained throughout the event. Blindfolding the guests and making them taste the baby food can be fun. Multiple games for couples can be played, such as trivia. A competitive stroller race by all the daddies can be fascinating. Games for the guests’ babies can also be introduced, keeping themselves busy and not trouble their parents.

You are chucking the traditional etiquette if you plan to include men in your baby shower. Some traditions and etiquettes have been old-fashioned, and it is entirely normal in the 21st century. A few things that should be taken care of when throwing a co-ed baby shower are avoiding awkward conversations that people do not want to include.

People attending the baby shower either bring gifts for the mother or the baby or both. The new mom-to-be and the baby can receive lots of advantages and end up with a large haul. This includes diapers, cute baby clothes, feeders, a shower kit, and many more. In case if the baby shower is a co-ed one, it is essential to give something to the new daddy as well. A baby carrier or bag with diapers can be the best gift for them.

The menu for the baby showers shall be decided very carefully that caters to both the men and women. Men have high caloric requirements, and it is necessary to select the food options they enjoy and keep them full. Traditionally, the food prepared for baby showers is very light, keeping in mind the women.

Finger sandwiches, chips, cake, and some desserts are usually present on the menu. Foods like meatballs or vegetables can be added upon personal preference. If you have men on board, do not forget to change this menu and add drinks. The male guests need excellent food to stay busy.

The baby shower is all about sharing experiences with the new parents. Old or experienced moms share their journey related to problems they face. In comparison, men do not talk about such topics in detail and especially in public. But they need to talk as well because they might be facing the same anxiety or fear as their partner, and it is very normal. Some help or coaching in the co-ed baby shower can be of great help in the future. The guest can give some words of wisdom to the couple, so they feel a bit relieved.

Are baby showers only for ladies?

Yes, baby showers were exclusively for ladies when they were about to have their firstborn. Only the female friends and family members were invited, giving blessings and gifts to the mother and the baby.

Who normally attends a baby shower?

There is no hard and fast rule on who attends the baby shower, and it depends on the expectant parents who they want to invite. The etiquette guidelines have ended in the 21st century as men like being equally involved in parenting activities as mothers.

Who pays for the baby shower?

Usually, a female friend, sister, or cousin throws a baby shower, paying for all the arrangements. But in some cases, the couple can make arrangements themselves and invite friends or family members.

Can you do a gender reveal and a baby shower?

A gender reveals party and a baby shower are two separate events that a couple celebrates before the arrival of their newborn baby. However, some couples have these both together in the last trimester.

Why are baby showers a thing?

A baby shower is the celebration of the impending birth of the first child in the family, and it helps the new parents to gain some knowledge and advice from the experienced members.

Do partners come to baby showers?

In the old times, the partners were not allowed in the baby showers, and the females were given some privacy during the event. But now, they accompany their spouses to the event and get equally involved in all the activities.

The presence of the men in the baby showers is not considered taboo anymore as they want to get involved and enjoy all the activities together. Having them around on the big day is a natural progression for the couple. The baby shower’s theme and food shall be decided carefully if you have men on board. They should feel included in all the activities and enjoy themselves. However, you can still have a female-centered baby shower like in old times if you are not comfortable having men around.